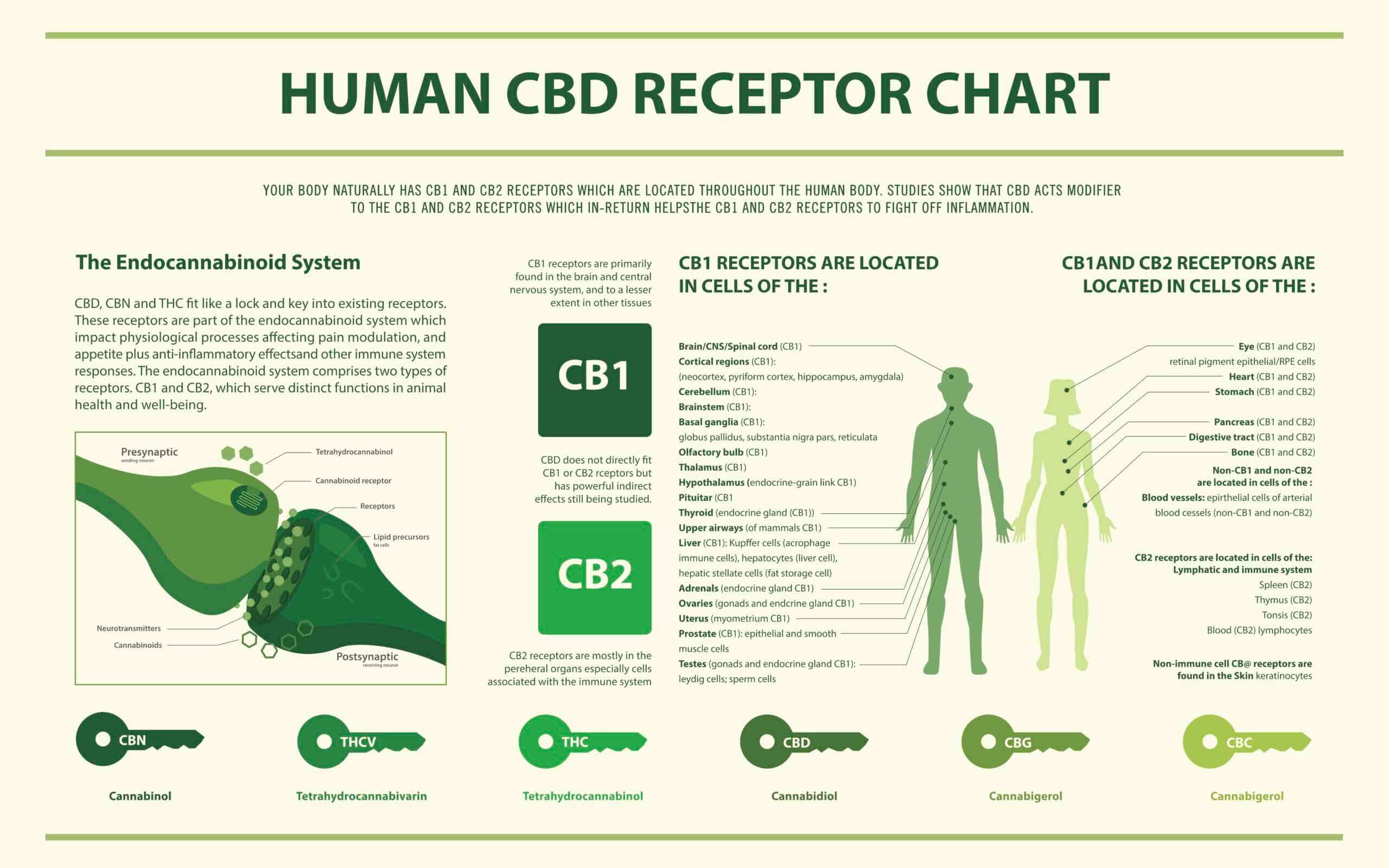 The endocannabinoid system is a biological system consisting of cannabinoids and their receptors. Information from research has shown that the endocannabinoid system is responsible for controlling cognitive responses such as memory, mood, appetite, fertility, pregnancy, pre and postnatal development, and internal balance. Apart from controlling the cognitive responses mentioned above, the ECS serves as the major system mediating the pharmacological effects of cannabis since the phytocannabinoids have a configuration capable of interacting with the ECS receptors.

Cannabinoids are the building blocks of the ECS. They are chemicals secreted by the body (endocannabinoids) or extracted from the cannabis plant (phytocannabinoids) and can interact with the ECS to promote internal balance. Cannabinoids are lipid-based compounds functioning as neurotransmitters in the body.

The endocannabinoid system tends to play a modulatory role in the body. They serve to keep the body in check and control the activity of other systems, thus ensuring internal balance. The ECS also plays an active role in health and disease thanks to the widespread of its receptors in the Central nervous system and the immune system. The modulatory activities of CBD on the digestive, immune tissues, brain, and endocrine system have been widely discussed by several researchers.

It is quite impossible to discuss the role of the ECS in health and diseases without referring to CB1 and CB2 receptors of the ECS. They were discovered in 1993 and were found to be largely distributed in the body with high concentrations in the nervous system, peripheral organs and tissues like the pancreas. These receptors serve as the primary target for endocannabinoids like anandamide, 2-arachidonylglycerol, and their cannabimimetic like THC, CBD, and other cannabinoids.

The CB1 receptors are highly concentrated in the central nervous system and peripheral organs like the pancreas. They serve as the primary point of activity for anandamide and THC. Its expression in the brain and other parts of the nervous system makes it responsible for the psychoactive activities of THC. The receptor also serves to elicit antagonistic roles in the treatment of obesity and some metabolic syndromes.

CB1 receptors are very important in the modulation and response of animals to impulsive behaviors, thus reducing the rate of anxiety and depression. They also serve to stimulate the brain’s rest center to promote relaxation.

There is an increasing body of research indication how CB1 receptors may serve to regulate the cardiac blood supply and output thanks to their high concentration in peripheral organs.

When it comes to addiction control, nothing does it better than CB1 receptors. They inhibit drug-seeking behavior among addicts, thereby making it a target site for all drug and behavioral activities.

The buildup of free radicals can deal a great blow on the activities of the body. They can promote the growth of cancerous cells and also increase the body’s vulnerability to diseases. The expression of CB1 receptors in the body cells and tissues can modulate the release of neurotransmitters in a way that prevents excessive neuronal activity. This can promote pain relief and other symptoms wrought by inflammation.

Successful interaction between the CB1 receptor and its target cannabinoids can inhibit gastrointestinal activity in users. It can facilitate the release of hunger hormones (ghrelin), which serves important roles in appetite control.

CB2 receptors serve as the primary target for 2-AG and CBD. They are widely expressed in the immune system, where they elicit their effects. They are commonly involved in limiting the psychoactive effects of THC and other CB1-based remedies. The expression of CB2 receptors is not only limited to the immune system but is also concentrated in the gastrointestinal system, the brain, and the peripheral nervous system. It is responsible for most of the health benefits of cannabinoids.

Role of CB2 receptors in health and diseases

It is pertinent to note that the mode of reaction and activity between CB2 receptors and CBD is quite unknown; the activation of this receptor can serve important roles in the following conditions.

a.      Therapeutic effects in peripheral disorders

b.      Prevention of osteoporosis

Information from clinical and pre-clinical studies shows how the activities of CB2 receptors can elicit protective roles in osteoporosis and cancer models.

The activities of CB2 in managing acute conditions like inflammatory pain, chronic pain, and neuropathic pains have been widely discussed. They also regulate the activities of the immune cells in the pain circuit.

d.      They play active roles in neuroinflammatory or neurodegenerative components

CB2 receptors have found use in the management and control of diseases like stroke, multiple sclerosis, amyotrophic lateral sclerosis, and Huntington diseases.

The endocannabinoids system and its receptors are responsible for modulating the activities of cannabis products. The receptors are scattered all over the body, including the skin, eyes, musculoskeletal system, and many more.

Don’t forget to contact us if you have questions on the Endocannabinoids system or its role in health and diseases. We will love to hear from you soon.