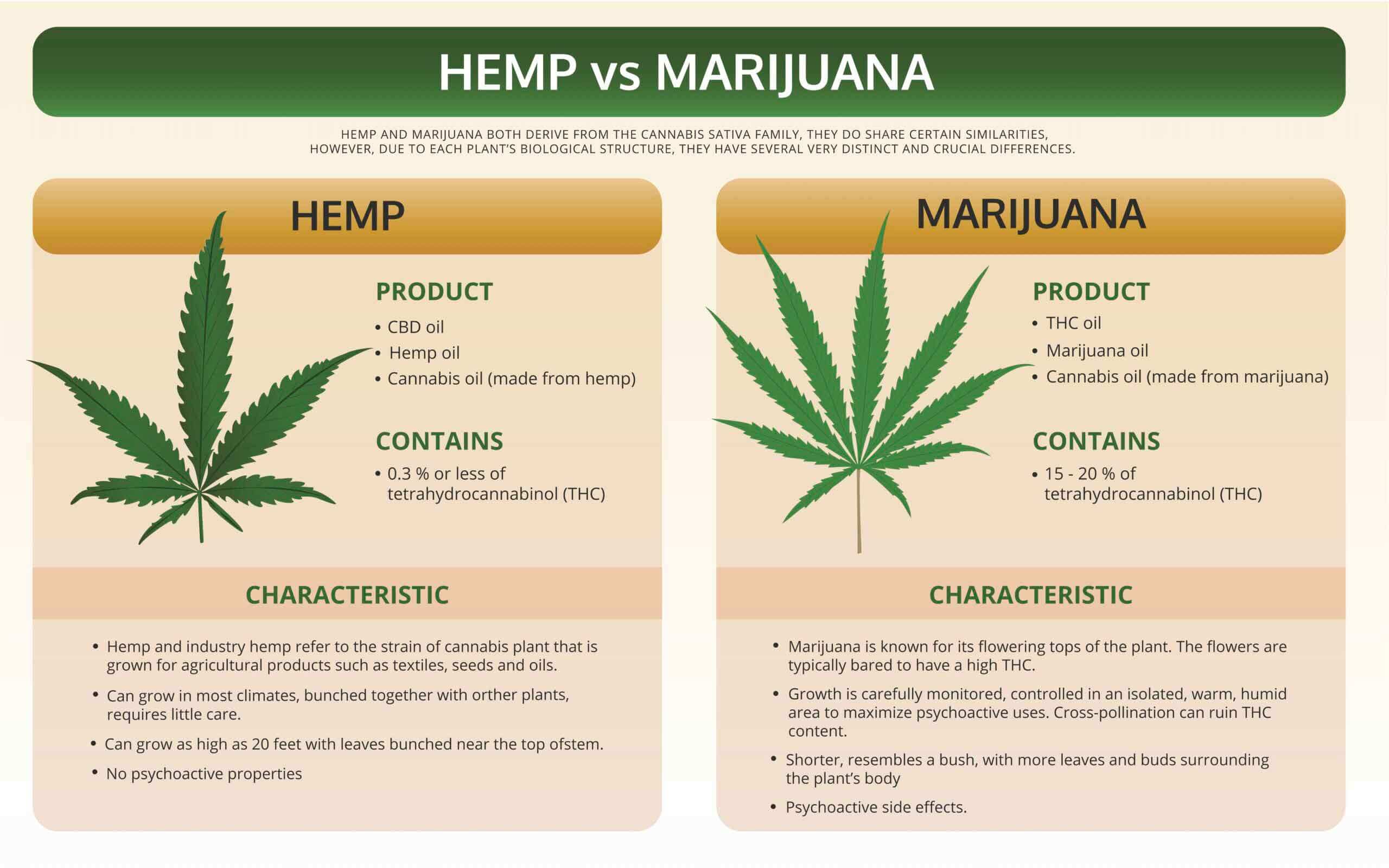 The use of Cannabidiol (CBD) is legal in several regions of the US, all thanks to its ability to interact with the Endocannabinoids system without producing adverse side effects. The legalization of CBD for both recreational and medicinal use in various regions of the US has brought about an increased interest in the potential benefits of what it has to offer. Trying to understand the cannabis plant can be tricky due to most regulations focusing on banning marijuana but not hemp. It is pertinent to note that the term marijuana and hemp may sound and appear confusing even to most CBD users. This is because the terms are often used interchangeably while referring to different items. This article will focus on bringing a solution to the age-long confusion between hemp and marijuana, stating their differences.

The cannabis plant is popularly known to have some therapeutic features that are capable of providing various medical benefits to man. It was used in Chinese and Roman medicine for tapeworm infection, menstrual disorder, seizures, and wound healing. The plant has three species wit clear cut differences based on the concentration of the plant-based chemicals and their pattern of growth. This plant is sub-grouped into two categories, popularly known as marijuana or cannabis and hemp.

Before some attempts in differentiating between these two categories, many people believe that hemp is obtained from the male plant while marijuana is derived from the female plant. Although these differences looked quite simple and easy to understand, they focused on a few parameters, which may not be enough in most cases. Let’s take a look at the plants separately before discussing their differences.

Hemp is a cannabis plant that is primarily cultivated for industrial purposes alone. It has a low concentration of THC, which makes it a more preferred raw material for the extraction and production of CBD and its derivatives. Aside from serving as a raw material for the CBD industry, hemp can serve as a good raw material for clothing, composite material, building materials, food industries, cordage, cosmetics, paper, textile, and plastic industry.

Marijuana or cannabis is a drug derived from the cannabis plant. It has been commonly used for both recreational and medicinal purposes. It contains a high tetrahydrocannabinol (THC) content, which makes it not preferable for the production of CBD based products. It has more than 483 different compounds with the most active compounds known as cannabinoids. Keep in mind that there is such a thing as marijuana derived CBD extracted from marijuana plants.

While marijuana is popularly known for its recreational uses, studies have shown that it has its great potential in therapeutic applications. In contrast, hemp is more of an industrial plant than marijuana. It produces the toughest fiber in the world. Scientists are currently exploring the possibilities of extracting biofuel from the hemp plant. Hemp is cultivated to produce a variety of products which are not limited to these:

a.   Food products such a hemp flour and cooking oil

b.   Medicinal products such as CBD-infused foods and drinks, topicals, Pet CBD products, and tinctures.

Marijuana produces flowers in contrast to the hemp plant, hence the reason why it is mostly regarded as the female plant. The hemp plant is a product of crossbreeding cannabis plant for several years to get rid of the possible presence of THC. In comparison to marijuana, hemp plant grows faster, hardier, and taller. It may need a controlled environment for appropriate growth and development.

As earlier stated, the hemp plant has a higher concentration of CBD than marijuana. This is the major reason why the cultivation, distribution, and marketing of hemp and its products are legal in different parts of the world.

The defining feature between marijuana and hemp is the chemical composition featured within each plant. Both marijuana and hemp have the potential to produce a high concentration of CBD, the non-intoxicating cannabis compound. Note that THC is produced at different levels. While marijuana can contain up to 30% THC content, hemp can contain no more than 0.3% THC.

The high THC content in marijuana produces psychoactive effects capable of interfering with cognitive functions or brain activity. This is why people who smoke weed get high. Hemp produces little or no side effects on its users, thus, making it safe. Please note that CBD does not elicit adverse side effects on the users. It can trigger the release of feel-good hormones and limit drug-dependence behavior without leading to addiction.

Marijuana and hemp are regulated very differently in the United States and around the world due to the difference in their levels of THC. Marijuana is still treated as a controlled substance, and it is federally illegal under the Controlled Substance Act. On the other hand, hemp was previously regulated as an illegal substance under the Controlled Substance Act of 1970. It has since been removed as an illegal substance under the Agricultural Improvement Act of 2018 (2018 Farm Bill) which federally legalized hemp and its derivatives that contain less than 0.3% amount THC

Marijuana and hemp all feature a different level of concentration of CBD. This concentration of CBD can be used to produce top-grade CBD products. They differ in their growth pattern, cultivation requirements, legal status, and effects on the body. Marijuana has a high THC content, which makes it illegal for use in several regions of the world.

If you have a question about hemp or marijuana, feel free to message us anytime. For great CBD products for humans and pets, check us out -> CBD PRODUCTS