The Endocannabinoids System and CBD for your Pets 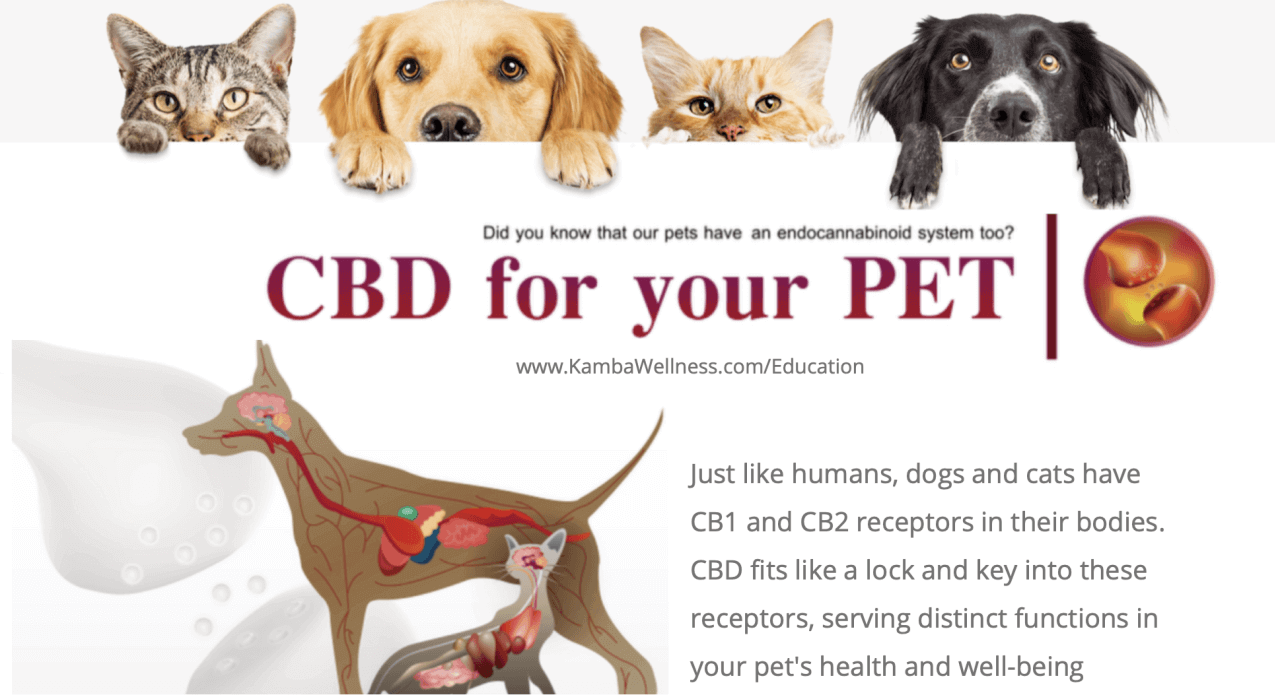 A lot has been said about the potential benefits of cannabinoids like CBD in their interaction with the endocannabinoid system to elicit a vast array of benefits. It will, however, interest you to note that the ECS is not only present in man but can be found in his furry companions like cats, dogs, rats, horses, and other mammals.

All ECS in mammals are the same; they perform the same function. They are responsible for controlling cognitive and physiological responses including pain sensation, appetite, mood, fertility, pregnancy, pre- and postnatal developments and above all, responsible for mediating the pharmacological effects of cannabinoids and other compounds found in the cannabis plant. It will interest you to note that the majority of the research work carried out on the potential health benefits of CBD and other cannabinoids utilize lab animals like guinea pig and rabbits since we possess almost the same ECS. In this article, we shall look at the functions of the ECS in pets and how it can help mediate the activity of CBD.

THE ENDOCANNABINOID SYSTEM IN PETS

It is impossible to discuss the benefits of the ECS without making references to its receptors. The cannabinoid receptors (CB1 and CB2) are the primary sites for the activity of cannabinoids. Cannabinoids are lipid-based neurotransmitters that are either indwelling (endocannabinoids) or can be extracted from plants (phytocannabinoids). These cannabinoids are configured to interact with the active sites of CB1 and CB2 receptors to bring about their therapeutic benefits.

The CB1 receptor is predominantly found in the central nervous system and other peripheral organs like the liver and pancreas. They are the primary site of action for anandamide (endocannabinoid) or tetrahydrocannabinol (THC) derived from the cannabis plant. The CB1 receptors are widely distributed in fat cells, fat, digestive system, lungs, liver, blood vessels, and the heart.

Although pets and humans may contain the same ECS, it is pertinent to note that the expression of the receptors differs. Information gathered from research has shown that dogs possess a higher number of CB1 receptors in the hindbrain structures than in humans, thus making it possible for dogs to experience a higher effect of cannabinoids than humans. Apart from this, it was also discovered that dogs have a higher concentration of cannabinoid receptors in the medulla oblongata, brain stem, and cerebellum.

By virtue of its location in the Central nervous system and peripheral organs, CB1 receptors are directly involved in pain relief, anxiety and depression, nausea and a host of other disease conditions directly affecting internal and hormonal balance.

These are expressed as in the immune system and play active roles in the release of cytokines and other immune-based molecules. It is the primary site of activity for 2-arachidonoylglycerol (2-AG) and endocannabinoid and CBD, its phytocannabinoids counterpart. They also play a significant role when it comes to the treatment of epileptic seizures. Contrary to what is obtainable in CB1 receptors, information gathered from research has shown that dogs contain about 30 times less binding affinity than in humans and rat populations. The extent of its activity is determined by the type of signaling pathways involved and the expression of cell membranes.

HOW DOES THE ECS AFFECT PET HEALTH?

Please note that all items stated here are from research and not official statements by the FDA or any other regulatory bodies.

a.     Anxiety and depression

Pets like a dog have been known to exhibit different levels of anxiety triggered by strange sounds, association with other animals and traveling long distances. The use of CBD oils and other cannabis-based products can elicit a calming effect on these pets. This is mostly achieved via the maintenance of hormonal and internal balance. CBD, after interacting with the ECS receptors can trigger the release of feel-good hormones and neutralize the harmful effects of free radicals, thus keeping your furry friend calm.

The ECS is responsible for pain management. Due to regulations, we cannot make any claims.

The use of CBD can enhance the production of sleek and glossy coats in pets. This comes in handy in eliminating the peculiar pet odor and possible allergic reactions.

Pets like horses, dogs, and cats, may be exposed to a high level of skin disease due to the nature of their habitat and activity. A healthy ECS can promote the healing of wounds from cuts, stings, bites and hot spots.

CAN CBD MAKE MY PET HIGH?

At the time of writing this article, the commonly encountered side effect of using CBD for pets is sedation. CBD does not make your pet high or lead to psychoactive effects.

The use of CBD for pets is highly safe. However, adequate care must be taken to remember that our ability to process cannabinoids may differ from one species to the other hence the need to pay special attention to using only products specified for your pet. Make sure you inform your veterinarian or CBD expert on your decision to use any cannabis-based product for your pets.

Contact us if you have questions on the ECS and pets and how CBD can help to keep your pet calm and active.